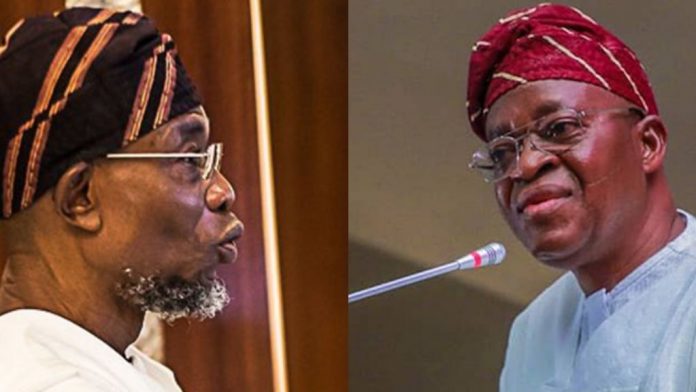 An uneasy calm has settled over Osun State as the All Progressives Congress holds its governorship primary on Saturday (today).

The tension is a result of a fierce battle for the sole ticket of the party between the Governor of Osun State, Gboyega Oyetola, and a former Secretary to the State Government, Moshood Adeoti.

Adeoti, a former state chairman of the party, is the anointed candidate of the Minister of Interior, Ogbeni Rauf Aregbesola.

Ironically, Oyetola was the chief of staff to Aregbesola when the latter served as governor of the state for eight years.

However, the relationship between the governor and the minister has deteriorated to the extent that they now belong to different camps of the party in the state.

Aregbesola has vowed that the incumbent would not be allowed to serve another term.

Also in the race is a former Deputy Speaker of the House of Representatives, Lasun Yusuf.

On Friday, a convoy of about 30 trucks of combined security team comprising soldiers, police, men of the Nigeria Security and Civil Defence Corps, Federal Road Safety Corps and operatives of the Department of State Services moved around major areas in Osogbo, the state capital in a show of force.

Tension has been on the rise since the beginning of the week when Aregbesola at the APC stakeholders meeting held at Ijebu-Jesha, declared Adeoti as his aspirant for the governorship position and asked members of the party to support him.

Also on the same day, the convoy of the minister was involved in a shooting while passing through Old Garage end of Osogbo.

The incident led to accusations and counter-accusations between Aregbesola’s men and Osun State Government. Also, the issue led to an exchange of words between the police and the NSCDC, as both agencies gave different accounts of what happened during the incident.

While the NSCDC, Osun Command, said operatives of the agencies in the convoy of the minister shot into the air when his convoy came under attack, the police in a statement by the Osun command’s spokesperson, Yemisi Opalola, insisted that security men attached to the minister shot without provocation.

The shooting incident also led to a protest by members of the National Association of Osun State Students at the NSCDC command headquarters, as the students accused the operatives of being used as political tools by the former governor.

Supporters of Aregbesola, led by the factional APC chairman, Rasaq Salinsile, had also protested at the police headquarters in the state demanding the removal of the commissioner of police, Wale Olokode.

During the tour to local government areas recently concluded by Oyetola, he called for support of members of the party. Analysts say the warm reception he got in most places visited could be suggestive of a favourable outing.

However, the large attendance at rallies held by Aregbesola in Iwo and Ikire might be an indication that the contest may be tougher than expected.

The camps of Oyetola and Aregbesola have also engaged in a hot exchange of words over the crises in the party.

Speaking in Ikire during the last rally held by Aregbesola’s faction, the former governor accused Oyetola of waging war against him since he was elected governor.

He had said, “I begged him (Oyetola) for two years. I told him that people must not mock us. I told him that he was heading towards destruction. I served this state with the whole of my heart. I also positioned Oyetola so that he could succeed me in office.

When we came to this town (Ikire) for his campaign, we were drenched in rain from Akire’s palace to this place. He got to the office and claimed I am his enemy. Those who contested against him during our party primary he pulled them closer, while he fights me.

Since Oyetola assumed office, he has been waging war against me as if I once harmed him. He claimed that I did not want him to emerge as governor. I told him that I heard him and that now he has been governor, what else does he want?

All that I warned him not to do were what he did. He opposed what I did, all the things I did together with him for eight years, he opposed and reversed them. He thought he can destroy me through my work; nobody was pushing him, he is the one pushing himself.

When I observed that he would not listen, I called people together that they should start telling people that progressives family must not be destroyed.

When Adeoti was angry with us, he did not abuse us. When we refused to do his will, he protested but he never cursed us. We have realised our mistake. That is why we gave him the ticket of our caucus.”

But responding, Special Adviser to the governor on Political Affairs, Sunday Akere, said Aregbesola only expressed personal opinion, insisting that Oyetola did not fight his predecessor.

He said, “Our former principal only expressed a personal opinion which no one was privy to. Oyetola did not fight him. He declared that Oyetola’s tenure was his third term and he wanted to be in charge.

He also promised those close to him that 80 per cent of them would return as cabinet members which did not happen. The former governor thought his eight years tenure was going to be like an eternity. Now, it has ended but he could not believe that reality. The root cause of the issue (disagreement) is what I just said.”